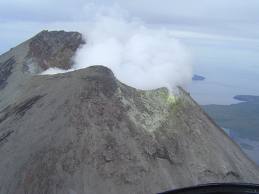 Partly cloudy satellite views detected elevated surface temperatures at the summit of Cleveland volcano last night. AVO has received no other reports of activity at this volcano.

If the lava dome continues to grow in the summit crater, the possibility of an explosive event increases. With continued lava dome growth, lava may eventually overflow the crater rim to produce a lava flow and/or collapse to produce pyroclastic flows. Sudden collapse of the effusing lava could result in the generation of a volcanic ash cloud. However, lava may continue to erupt without an explosive event. It is possible that explosions from the summit crater vent could produce ash clouds that may exceed 20,000 ft above sea level. These events can occur without warning and may go undetected in satellite imagery for hours. However, lightning associated with significant ash-producing events may be detected within minutes using an automated alarm system.

AVO does not have a real-time seismic network on the volcano and thus we are unable to track local earthquake activity related to volcanic unrest, provide forecasts of eruptive activity, or confirmation of explosive, ash-producing events. In the event of a large explosive eruption like that in 2001, it is possible that seismic signals may be recorded on AVO seismic networks at nearby volcanoes. AVO will continue to monitor the volcano using multiple sources of satellite, lightning detection, and distant seismic data.